Flushed c 18 silver y`s from dune grassland in Pembrey Forest (at N end near RAF range) this afternoon, so there may be some movement afoot. It`s by far the largest number I`ve had this year.
Subsequent planned visits to Ffrwd Fen and Pembrey Saltings did n`t happen though, as I was locked in Pembrey Forest by RAF staff locking the forest gate much earlier than is normal and the Country Park staff did not have up-to-date keys from NRW! So, a six-mile walk home instead of mothing.
Fortunately, I made phone  contact with an extremely helpful NRW staff member very late in the afternoon, who made the suggestion of contacting the horse-riding school in Pembrey Forest and, through that,  I eventually retrieved the abandoned car earlier this evening. I`ll be emailing her (and her boss) next week to thank her.
Things are running late, so I now won`t trap away from home tonight as was planned, but I`ll probably give home trapping another go, even though a trap was out in my garden last night. Subsequent nights can bring different moths and those silver y`s are suggestive that something better may be around!
I`ve got one grass moth in the fridge from Pembrey to check, and I had a couple of sightings of silver-washed fritillaries there but that`s about it...not the most productive afternoon, though good for exercise! 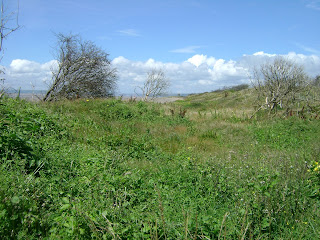 Above: before the `Great Walk Home`, eroding mature dune ridge, with much Clematis (Barry Stewart had Haworth`s pug here c.25 years ago) and looking N towards the RAF tower in the distance (you`ll have to `click on the pic` to see it!).
Posted by Ian Morgan