Until this year, I`d had a monopoly on cream-bordered green peas in Carmarthenshire, but 2016 saw Mel Jones capture this lovely moth further west along the Carmarthenshire coast at or near Llansteffan. Indeed, Mel has caught it no less than three times this year, indicating a resident population there as is also justifiably presumed to be the case at Pwll-Burry Port.
I was beginning to think that I might not catch a cream-bordered green pea this year, but one last night (27/8) `saved the day` (or should that be `saved the night`!). I include a photo below, with a backdrop of the current Radio Times. Note the reddish termen (rear wing border) suggesting an individual of the NW France/SW England population rather than those in SE/E England.
It may be worth trying for this species on the NW Gower coast - putting the traps near stands of sallow Salix cinerea (the Cornish population is thought to be using that willow rather than the thin-leaved ones such as S. viminalis etc). 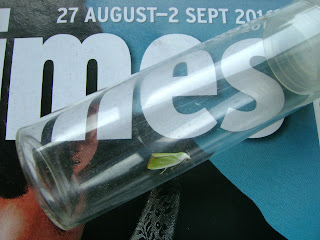 Above and below: last night`s cream-bordered green pea, caught at Pwll, Llanelli. 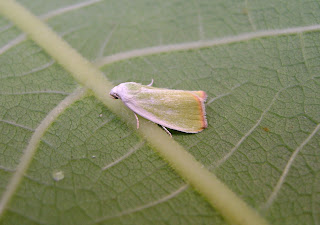 It was not a bad night, with a few other moths of mild interest among the numerous large yellow underwings, causing restless mayhem in the traps and disturbing other, more placed species.
There were 7 silver y`s, and singles of rusty-dot pearl and rush veneer to represent the migrants, a FFY frosted orange and a wax moth Galleria mellonella. Also a gold spot, some Chilo phragmitella, lime-speck pug, tawny-speckled pug, Vine`s rustic, yellow-barred brindles and a tawny-barred angle. Brimstone moths were in unusually large numbers (38).

Postscript: here`s a belated photo of the wax moth from last night: 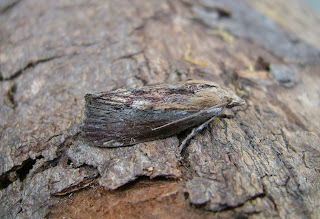 ...and a pair of wetland moths that turned up, Chilo phragmitella and brown china-mark. Ringed china-mark is far more regular and common with me. 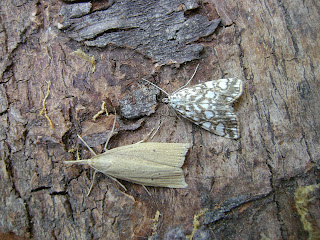