Five trapping sessions so far this month have produced a motley selection of familiar species on each occasion.  Last night was no exception, yielding 72 individuals of 22 species from two actinic traps. Most notable were a Ringed China-mark and Caryocolum blandella, first and second sightings for the year respectively. 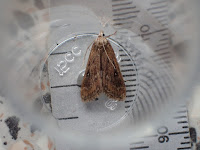 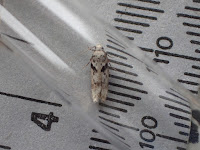 Another second for the year was this Ermine; like the first, a few weeks ago, this one seems to be very white, including the terminal fringe, which suggests Yponomeuta cagnagella. 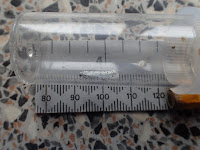 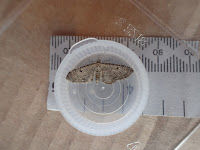 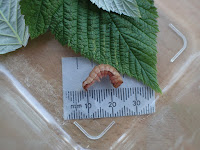 I caught the pug a week ago and still haven't managed to name it. The large discal spot and prominent tornal spot are distinctive, could it be a grey Wormwood Pug?  The caterpillar is another puzzle from a week or so ago.  It was found on a Raspberry leaf, but I've absolutely no idea of the species. Perhaps someone might recognise it? 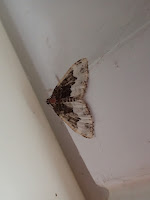 Finally a very tatty Cloaked Carpet from the night of 2 August, in contrast to Jane's fine specimen in Ian's blog below.

P.S  I apologise for the strange lay-out of the photographs, I have yet to acquire the skill of arranging reduced-size photos and script in the way I would like to put them.
Posted by Chris Handoll