During the last two weeks, I've been working on habitat surveys centred on the 15 recent Marsh Fritillary populations within 5kms of Brechfa forest. Although as an incidental activity I've found larval webs on new sites near Capel Isaac and Figyn Common, and confirmed known sites in Brechfa and Salem, an unexpected bonus today in pony fields near Abergorlech was a fresh pyrausta moth settled on Succisa flowerhead. I think it is either purpuralis or possibly aurata, but just a nice sighting. At 3 sites near Brechfa today, there were also Silver-washed Fritillaries flying. 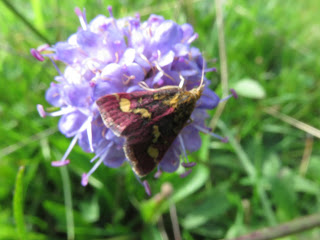