Plenty of moths around last night, as might be expected in the mild, overcast conditions, but nevertheless disappointing insofar as there's nothing much worth reporting.  This morning was all about counting the Large Yellow Underwings and Flame Shoulders, 61 of the former and 37 of the latter.  The problem with getting so many YUs at this time of year is that they blunder around in the traps and cause havoc amongst the other occupants, several of which were quite unrecognisable. FFYs were Feathered Gothic and Centre-barred Sallow.  A surprise find was a White Ermine, possibly a second generation?

An interesting footnote is an item passed on to me by a Cousin who is a butterfly enthusiast, it involves a report from the Cheshire & Peak BC of a gynandromorphic Common Blue which was photographed at Winsford, Cheshire by Barry Mills: 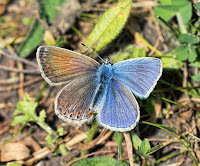 I suppose that there's less scope for gynandromorphism in the moth population.
Posted by Chris Handoll