Another good (non-moth) record from Rhandirmwyn

New moth trapper Jane Hand caught this rare large longhorn beetle at her Rhandirmwyn garden moth trap on 18th August - Prionus coriarus, of which there are only a very few Carmarthenshire records, mostly in NE Carmarthenshire but also one from Dinefwr Park, Llandeilo. Interestingly, the first county record was from Rhandirmwyn, when the late Dafydd Davies found one on its back below his porch light over forty years back (14.8.1972) at Ty`r Ysgol, not far from Jane`s home. Personally, I`ve never seen this species - so, a really good record. Thanks To Jane and Isabel for bringing this beetle to my attention.
Recently, I had the much smaller Leiopus nebulosus (though I did n`t recognise as such to begin with) at my Pwll garden light trap; it is otherwise only recorded - as far as I know - from the ancient tree-rich Dinefwr Park. Sam Bosanquet has also been having longhorn success at his home at Dingestow in Monmouthshire (see the interesting Mons moth blog). 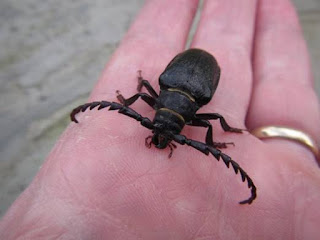