I was too tired after yesterday`s long walk to trap away from home last night (5/8) and, this morning, I`m so stiff-legged that I`m walking like the Tin Man in `The Wizard of Oz`! So, as just noted, it was just a trap at home.
Numbers were actually quite good and it made me regret this morning that I did n`t trap in a different habitat (conifer woodland was originally planned for last night).
Inevitably, many of the moths caught in last night`s trapping session were the same species as the previous night but there were some `newbies` including FFY hedge rustic, dusky thorn and the ear sp. shown below. It`s certainly late summer! The only migrant was a solitary silver y - and a diamond-back. 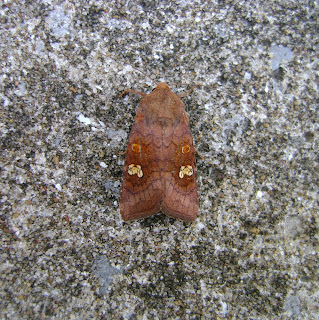