The Pwll garden traps had some interest in them from the night of Saturday 23/7 - a fair mix of the usual July moths, with a sprinkling of `good moths`. The weather forecast was wrong - it was supposed to be light rain at about 9.00pm in the evening and clearing later, but a light drizzle awaited me at about 5.30am this morning, with very many moths trapped upside down on the puddled surface of my flat roof, where I`d placed one trap. Nevertheless, there were moths of interest safely trapped inside this and another trap placed in the garden.
Probably the best moth - I far as I was concerned - was a solitary small chocolate-tip, a very scarce species that I`ve long wanted to catch. Indeed, I`ve unsuccessfully targeted areas of aspen in the past in the hope of catching one. Presumably mine came from areas of tree plantings on the adjacent Millennium Coastal Park which include stands of aspen and where, hopefully, small chocolate-tips have established themselves. Their caterpillars also feed on creeping willow Salix repens, which occurs on the coast and some inland heaths. Perhaps they may be at Steve Clarke`s aspen woodland? 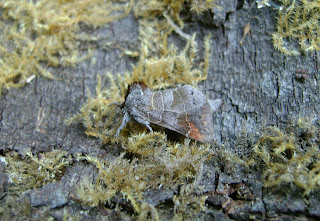 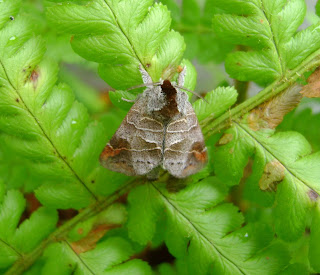 Above: small chocolate-tip. In the lower photo, the moth is `whirring` its wings after release. 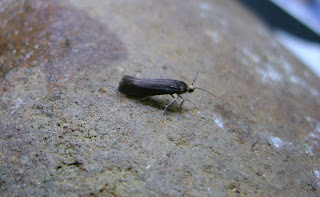 Above: I suspect that this is the so-called `dark ash-bud moth` Prays ruficeps, which used to be regarded as a dark form (var. rustica) of P. fraxinella in the past. I seem to recall Sam having it in the last year or two? 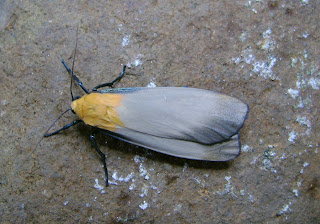 Above: another (male) four-spotted footman popped by again last night. 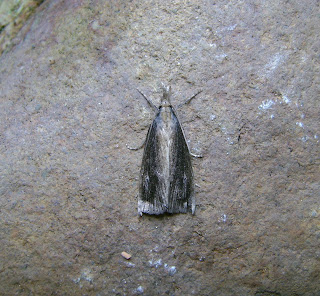 Above: a dark male Chilo phragmitella, from adjacent wetland habitat.

Other moths of minor interest included a FFY black arches, singles of migrant rush veneer and silver y (together on the same egg carton), small rivulets, and bordered beauties.
Posted by Ian Morgan