On the evening of Tuesday 19th July, I spent about 3/4 hr `dusking`(though it was `pre-dusk` really) at the North Dock dunes LNR, Llanelli.
A few diamond-back moths were seen (only three) and I wonder whether these, and others seen the previous night at a small brownfield site at Pwll, are the progeny of the recent mass immigration rather than a new pulse of primary migrants?
Sweeping yielded plenty of the rest harrow plume Marasmarcha lunaedactyla and some common crambids, though not much else, but matters changed when I went onto the saltmarsh/dune transition zone. Here, I noticed many small tortricids flying around clumps of sea arrow-grass Triglochin maritima and netted a few. The netting was the easy bit - the next step, `tubing` the specimens was difficult as they were so energetically active in the net.
They proved to be Gynnidomorpha vectisana,  a small (c 5mm) saltmarsh species also known from the North Gower saltings and one that I`ve light-trapped at North Dock previously. I expect that, currently, it will be elsewhere on other Carmarthenshire (and other South Wales) saltmarshes if  moth recorders are able to check - Gwendraeth, Tywi and Taf estuaries come to mind eg saltings at Kidwelly Quay, Pensarn (Carmarthen), Llansteffan, Black Scar and Laugharne come to mind as providing suitable habitat. 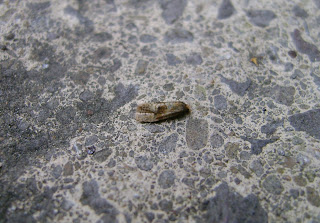 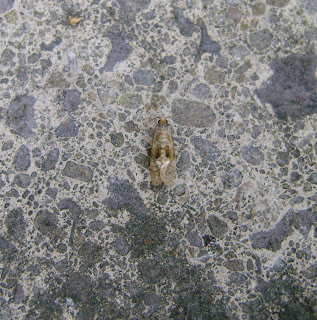 I went through the large number of micros that I light trapped at nearby Machynys on the same night and they did indeed hold some interesting/noteworthy moths - I will blog in due course, once I have taken photos etc.
Posted by Ian Morgan