More from the hills...

On Wednesday night (27/7) I trapped - as you know from my previous blog - at the old lead mine site at Nant y Bai, Rhandirmwyn. Yesterday, I took the opportunity to check the few micros that I`d caught (all common species) and also two Hadenid moths. When Chris Manley and I trapped at this site earlier in June, we caught quite a few lychnis. On this latest occasion at the site, I too trapped a definite lychnis quite early into the trapping session, but I later noticed that by far the greater majority of these `lychnis` subsequently `looked different`. At actinic light, they are a very active moth and even when `potted up` would n`t remain still for inspection, so I put two specimens that I`d caught away with a few other moths to take home to check.
These were, as noted above, checked yesterday and I believe that they may be the dark western form of tawny shears. I include a photo of one of them below, together with a photo of  a campion that was caught in my garden trap last night (I have n`t a photo of a lychnis to hand, but it`s generally very similar to the campion).
There are older Rothamsted records of tawny shears from Dafydd Davies`s erstwhile trap at Ty`r Ysgol, Rhandirmwyn (less than a mile away) and the species is shown (on the latest NBN distribution maps) as quite widely occurring in coastal Pembrokeshire, Ceredigion and Glamorgan, with some older inland records also in Ceredigion (perhaps at similar lead mine sites) . Carmarthenshire shows up as a strange and seemingly anomalous blank in its distribution. The MBGBI also shows some coastal records for Carmarthenshire.
As I noted in my previous blog, sea campion - a potential food plant for this moth - is quite abundant on spoil at the lead mine site. 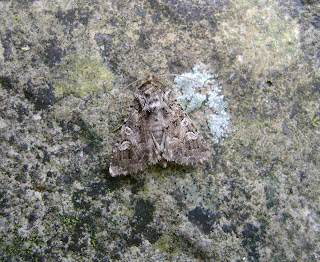 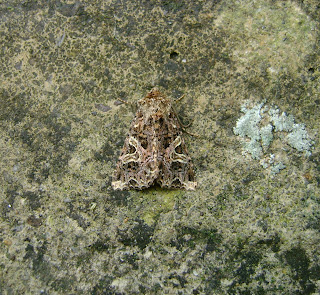 Above: a campion for comparison.