Minimal moths in the middle of nowhere...

It`s `BSBI Week` at Glynhir, the annual get-together of botanists to help with recording of plants for the latest distribution atlas and to learn identification skills at the same time. As I had intended to visit Cwm Twrch this year, I volunteered to search for bog orchid at a site where Graham Motley and I had discovered it back in 1998; intermediate sundew was also sought, at a different location - Cors Helyg at Rhosaman, where I had found it a quarter-century ago but which had not been seen since, in spite of searching by others.
Accompanied by Rob Shaw (late of the Records Centre at Whitland but now living back home in England), I was able to rapidly re-find the intermediate sundew, remembering it grew on a flushed slope rather than the boggy basin mire where the round-leaved sundew was common. We failed however, after much careful searching, to find the diminutive bog orchid, in spite of very careful inspection of the flush in Cwm Twrch where it was last seen.
The effort took a lot of laborious trekking across many very wet and very `sinky` extensive cotton-grass flushes, as we approached Cwm Twrch by a presumed `easier` route from the west. It was a hard, tiring slog, in heavy wellies, of just under 4 miles all told, with additional climbing of rock scree areas also involved.
Obviously, I was after moths too, but apart from Glyphipterix thrasonella in every wet, rushy area, only a few grass-moths (to be det. later) and brown china-marks were seen, the latter in the Cors Helyg boggy mire. Hardly a `star day` for moths! 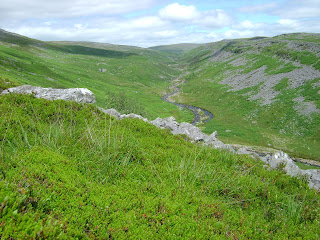 Above: looking northwards into the bleak, acidic `core` of Mynydd Du, with the upper reaches of the Afon Twrch in view. Scarce crowberry plants in the foreground (of which plenty grows on these quartzitic scree slopes). I was on the `look out` for upland moths - but none!
Posted by Ian Morgan