I trapped last night, too, but the turn-out was a disappointing 35 moths of 23 species, with two FFYs, Purple Thorn and Lesser Broad-bordered Yellow Underwing.  Yesterday was more interesting though, I stumbled across four micros during the day, starting indoors with another Case-bearing Clothes Moth (Tilia pellionella).  I usually see these fluttering around, but this one was at rest on a skirting board so I was able to apprehend it without a struggle. 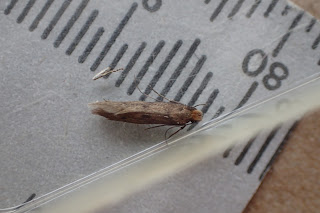 N.B. I haven't been pulling its legs off!  The lone leg is from a dead moth that was a previous occupant of the box.

Then during the afternoon I caught two moths at rest on windows, one in its usual place (the woodshed), both I believe to be Borhausenia fuscescens:

Last and least, with a FW length of about 3mm quite the smallest moth that I can recall catching, this one was on the window of the utility room, where I had emptied the trap earlier on, so it may well have been amongst the catch: 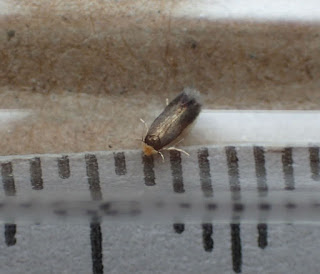 The yellowish head and eye-caps make this a Stigmella sp. I think, and in the absence of any white markings it may be a S.ruficapitella type, but no doubt this would require examination of genitalia to confirm and I can't see myself ever being proficient enough to tackle something so small!

As an afterthought I'm including one more micro in this narrative, one that was in the trap on Monday night.  Unfortunately the photo is not very good and the moth has since escaped so I can't improve on it, but I suspect that it might have been an Elachista sp., possibly E. canapennella: 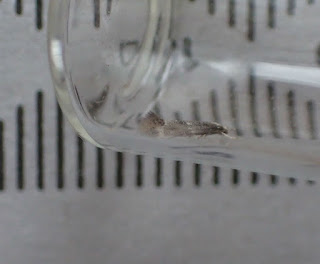