Shortly, I`ll be getting together a number of truly terrible `record shot` photos of some of the many micros recorded on the very warm night of Tuesday, 19th July, the delay in blogging being caused by a large backlog of micro-moth specimens to look at. 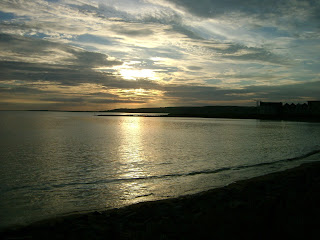 Above: setting the scene - on the coast at Machynys with the Burry Inlet almost at high tide. The trapping site is on an area of flower-rich `wasteground` behind the shoreline housing.

As noted above, Tuesday was a really successful night for numbers and variety of moths, micros in particular, and the sort of trapping night that seems to be very infrequent these days. The heat meant that the moths were very restless when the traps were opened just after dawn the next morning. One very striking and unmistakable tortricid was new to me when I saw it perched outside the box, but the blighter flew off as I very carefully approached with my camera (my first beautiful hook-tip did exactly the same a few years back).
Consequently, I returned  last night to see if I could recapture one and, fortunately, two were caught. The one shown below was the second, after the first had been safely `potted up`. It is Epiblema foenella, which is associated with stands of mugwort and it is quite  a scarce moth in our county. 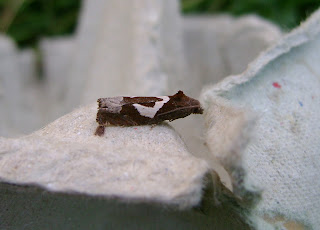