I set out one trap in the garden last night and a good mix of the usual late July/early August gang were there, with black arches numbers starting to pick up - five were present. An interesting-looking skinny, black pyralid flew off just as I looked at it, so I`ll not know what it was and it was not helpful that my eyes were out of focus only some 5 mins after tumbling out of bed for the `moth shift`. A very few micros were potted up to look at later. 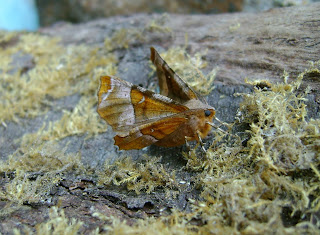 Above: a second generation purple thorn with its slightly curled wings. The upper hind-wing has a dark spot in the outer area, aiding i/d (not visible in this photo). 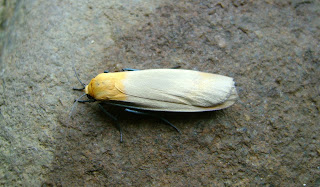 Above: a rather buff-backed male four-spotted footman, the largest of the regular footmen species. The large size is a `clincher` and the black legs are obvious too. Compare it to one of my more `standard` grey-backed males in a very recent blog.
It might be worth trapping tonight, before colder winds come over the weekend.
Posted by Ian Morgan