Could it be getting wetter?

Yes it could, it's got wetter since Wednesday night.  I had put two traps out late afternoon, when it was dry, and I left them out in spite of the fact that it had started to rain when I went to bed.  I woke up at 3.30 and heard it raining, quite hard, so I decided to close the traps down then, although it was still quite dark (the days are closing in!)  Quite a few soggy moths were rescued from outside the traps, unidentifiable but possibly capable of surviving.  But it was all worthwhile!  77 moths of 42 species were recorded.  A few FFYs including Riband Wave, Green Pug, Smoky Wainscot, Antler, Timothy Tortrix, Pinion-streaked Snout, and the huge Tortrix Lozotaenia forsterana: 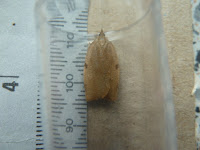 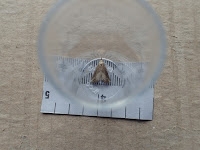 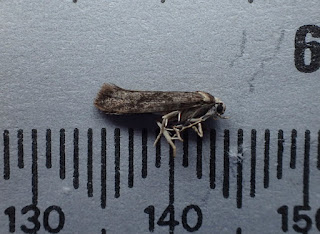 My best guess is Paraswammerdamia nebulella.  Ian, have you had any suggestions regarding a similar moth in your blog on Thursday?

Finally, a pug which I'm not sure about (just for a change!)  Broad-winged, quite well-marked but with no appreciable discal spot, probably a Common Pug but I normally see a white tornal spot on these.  Suggestions would be welcome. 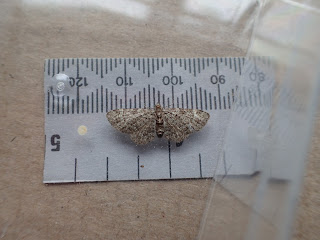