It was almost unpleasant to view my garden moth traps just before bedtime last night, such was the number of moths, caddis flies and water boatmen (the latter were in their hundreds). Another early start this morning (my `Circadian rhythm` is now adjusted to dawn starts), and after covering my two garden traps (MV and mains actinic) with sheets for later inspection, I drove the short distance to collect my three `away-from-home` mobile actinics. The latter were all placed in the vicinity of Pwll Fishing Lakes (now not used as such, but a valuable wetland) - one near a minor river, the second in fen/reedbed at the north side of the lake and the last on a small area of brownfield to the immediate west. 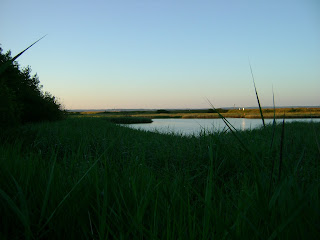 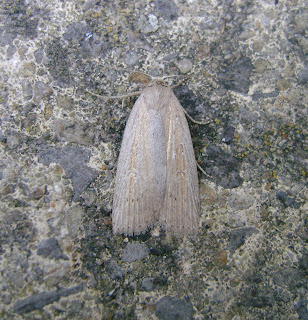 Above: silky wainscot (showing its silky `sheen`), also caught at the river-edge site and in my garden traps. 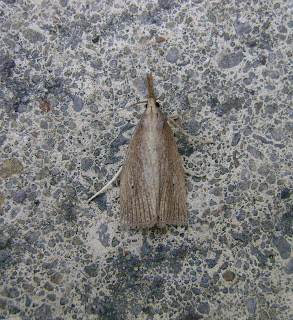 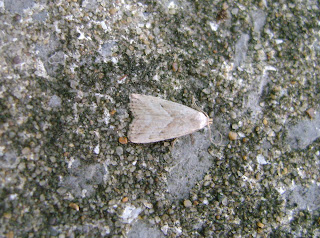 Other wetland associates caught included water veneers, ringed china-marks, small wainscots, blue-bordered carpet (associated with alders) etc. It would be good if inland recorders could target wetland sites in other parts of Carmarthenshire to ascertain the true distribution of these species.

My garden traps had particularly good numbers and variety. One regular garden species is the four-spotted footman, of which I had two males last night and one is shown below in the company of a bordered beauty, in situ on an egg carton in the trap: 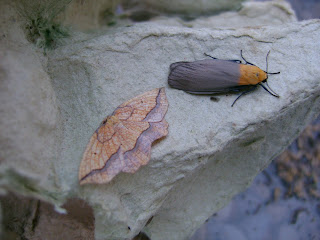 The easterly breeze brought a surprise last night, perhaps from the Glamorgan hills - see below: 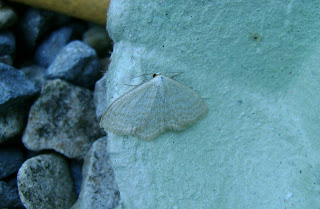 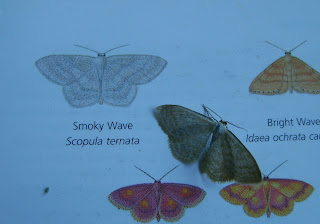 Above (two photos): I believe that this is a smoky wave - note black scales on the wings (click on pics to enlarge), a species that I`ve seen in our upland areas, but unexpected on the coast. Note the different colours of the moth in the two photos (it`s the same moth!). I did consider cream wave but it`s too late for that species, amongst other things. 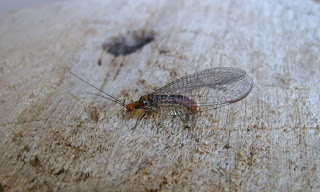 Above: finally, I caught this large lacewing last night and I have emailed the photo to Colin Plant (the National Recorder for this group of insects). Last year, a very similar one proved to be a rarity - I forget its name now (I`ve got it somewhere) - so it`s worth photographing similar specimens and to send the photo to Colin.
It is really worth trapping tonight if you can - don`t be put off by thunder or heavy rain, the moths don`t mind - just cover your MV bulb with a pyrex dish or similar.
Posted by Ian Morgan