Back to the hills...

I had been meaning to return to the old lead mine site at Nant y Bai near Rhandirmwyn since Chris Manley and I visited back in June, mainly to see if I could catch some later season upland moths such as the scarce silver y. However, life`s tasks intervened, and it was only yesterday that, at short notice, I decided it `was now or never` if I were to have any chance of trapping a scarce silver y, as its season was coming to an end.
An hour`s drive took me to the site and I set up three battery-run actinics - one near the informal car parking spot, another on a bilberry/heather slope adjacent to a conifer plantation and the last some distance up the boulder-strewn streamside. 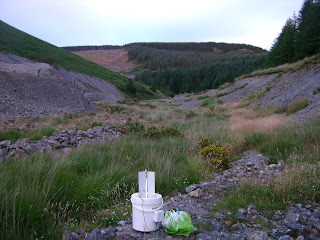 Above: awaiting the moths - my furthermost trap up the streamside `cwm`.

I awaited the moths to arrive, but they were slow in coming and it was then that I noted that the pestilential midges of the last visit were totally absent. It was too cold, with starry, clear skies overhead in the absolute pitch black night (except for a vague light in the northern sky above the hills). I could see my breath in the torchlight, just as in winter. More cloud had been forecast by the Met Office, so I was disappointed.
I awaited until midnight, periodically inspecting the two nearest traps - which had, by now, a steady but not numerous stream of moth visitors - and, perhaps unwisely considering the remote location and the absolute darkness, remembered words that I had read the previous afternoon, does neb yn gwybod beth digwyddodd ar y mynydd (`nobody knows what happened on the mountain` - about rustling, robberies and even murder in these very uplands). Sensibly, my thoughts re-focused on the moths!
At midnight, I did a final inspection of the contents of the three traps, dealing with and collecting in the furthest one first. The list was not impressive - a little over 30 species of macro-moth and 8+ of micros (I suspect that it was too cold for the latter). Among the macros was a narrow-winged pug (no photo sorry - it `jumped ship` due to my tired clumsiness), dotted clay, small elephant hawk-moth, red-necked footman, true lover`s-knots and a gothic. I`d been saying very recently that I only see the gothic about once annually on average, but here was my second in a week and yet another was fluttering against my kitchen window back home at Pwll when I had a late supper/early breakfast at c 1.30am!
Of the macros at the lead mine traps, a Hadena sp. (thought at first to be a lychnis, but is being checked, as several at least looked like tawny shears) was by far the commonest with at least 25+ individuals (most other species were literally just in ones or twos), a reflection of the local abundance of one of its food-plants at the site, sea campion, which grows on the lead mine spoil.
Only eight or so species of micros were recorded (I`ve still got a couple to look at) including the tortricid Eupoecelia angustana, shown below: 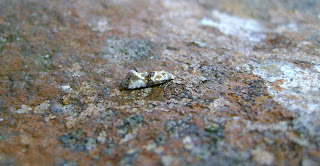 I noted five species of crambid grass moths within the poor micro catch - the easy-to-identify upland Catopria margaritella and C. pinella and a species of drier habitat that was associated with the streamside shingle banks - Agriphila inquinatella.

Above: This is A. inquinatella rather than the similar A. geniculea. 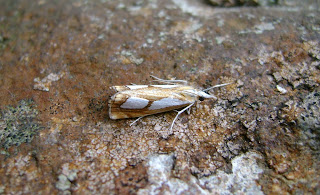 In the event, I did n`t catch that scarce silver y but it`s a grand site for trapping and, like MacArthur, `I will return`. Nothing ventured, nothing gained!
Posted by Ian Morgan