...back to the brownfield moths - last night at Machynys.

I obviously did n`t have time this morning to write about last night`s trapping at Machynys, Llanelli, but I have now had the chance to go through some of the moths, though several micros need further examination or retention for more expert determination.
As it was mainly overcast, with only light winds and fairly warm last night (29/7), the number and variety of moths awaiting me this morning was quite reasonable, making trapping at this rich brownfield site certainly a change from my usual garden assemblage.
Perhaps the best species last night (to my eyes at least) were the six barred rivulets that were caught. Its caterpillars feed on red bartsia, which grows frequently on the dry soils hereabouts. 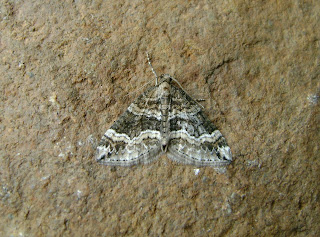 Above: barred rivulet.
Dingy shears, lime-speck pugs, wormwood pugs, yellow-tails, scarce footman were some of the other macros of slight interest in a catch that was dominated by smoky wainscots (35) whilst the nine silver y`s that were caught was the highest number of this species recorded by me this year, and suggesting a little immigration. Many markedly smaller and darker individuals of the common rustic agg. hinted at possible lesser common rustic. 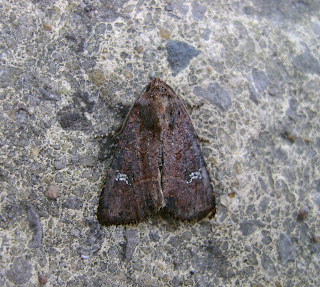 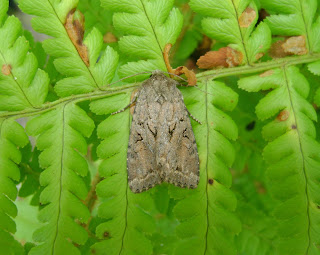 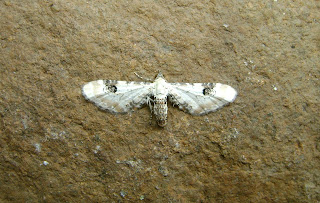 Above: lime-speck pug.
Quite a few micros were caught and one trap, deliberately placed within a large stand of mugwort, had two moths that depend on this plant - seven individuals of the very attractive Epiblema foenella (which was recently caught at this site) and four bordered pugs.
Cochylis atricapitata was also in the trap - this is a cochylid that feeds on ragwort. 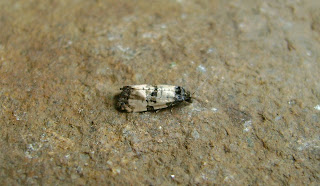 I was considering trapping at home or somewhere local tonight, but the clearing skies (and a changed forecast of more of the same) means that I`ll probably have a rest instead.
Posted by Ian Morgan