Firstly two from this morning:

I think that the above must be a Double-striped Pug.  Nothing else seems to fit the size & wing pattern, but it doesn't hold its wings flat out like a Pug, rather they are in a semi-raised position.

A tiny moth, front end raised up Gracillariid-fashion, perhaps a Parornix sp., probably P. anglicella?
I've added a second image, sadly it's no better than the first but at least the head end is in focus!

I posted the one below on 18th July suggesting that it might be a Eucosma sp., but a better photograph suggests that it's Lathronympha strigana. 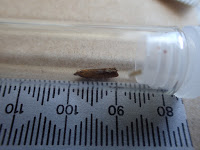 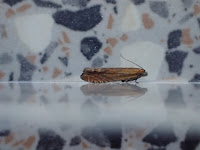 Finally, can I mark the one below down as Epagoge grotiana?  If so it's poorly named, not at all grotty, quite pretty in fact!