A busy night at Maenol ..

.. resulted in an entire morning occupied with emptying the two actinic traps, photographing and documenting the contents.  Nothing startling it has to be said, but nice to see FFYs Black Arches and Udea lutealis:

In fact U.lutealis may be a first for me but I haven't checked, and as the failure to remember two previous Bordered Beauties has shown, my memory is getting fragile!  Two more of this species arrived overnight but I won't post a photo, others have done so recently.

I positioned a small actinic trap close to the bank where Greater Stitchwort abounds in the hope of attracting C.blandella and it seems to have worked.

Perhaps the most striking of the night's visitors was this Great Diving Beetle: 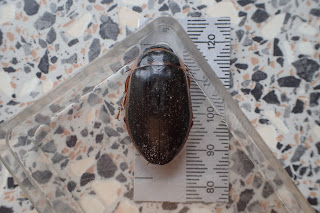 It dwarfed everything else in the trap but didn't seem to have had a mothy breakfast!

I omitted to mention the Cloaked Carpet, a little worn now, I think that their season is coming to an end. 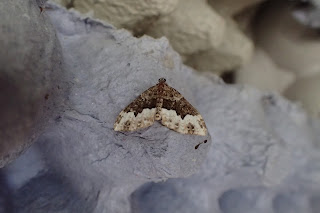