Given the positive change in weather conditions, I put out the home traps at Pwll last night, plus three battery-run actinics at a site in SN50 - an area of rough ground, poor quality wetland and willow plantings at Dafen Industrial Estate (or whatever similar title it has).
An early start was obviously needed, and a rather groggy 5.00 am drive to the Dafen traps was made in foggy conditions. The first trap had a relative abundance of shaded broad-bars (15) and smoky wainscots (12) but not a great deal more (some common micros still to check), whereas the other two traps, set quite close to each other in an area with much mature white willow and rank meadowsweet grassland etc, had a more diverse set of moths. However, nothing particularly interesting was caught - blackneck was perhaps the best, but it nevertheless helped levels of recording in SN50. 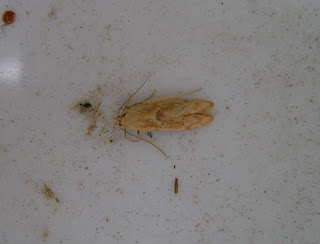 Above: Blastobasis laticolella, not infrequent around Llanelli, but not as common as the smaller and darker B. adustella, which was also caught. 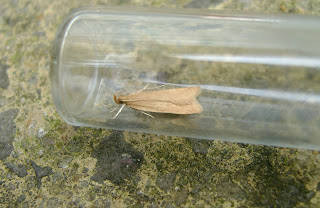 At the Pwll home trap, a male four-spotted footman, the orange form of buff footman, five scarce footmen and other usual semi-coastal moths (lackeys, yellow-tails, etc) made up the catch. Two silver y`s (the first for many weeks) suggested that migrants were starting to reach SW Wales. 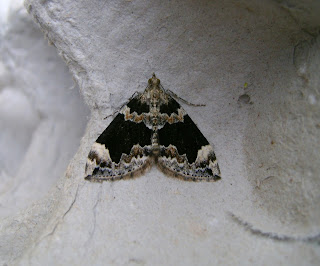 Above: a fresh and handsome dark marbled carpet. 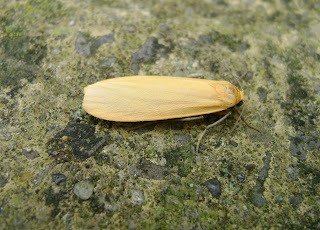 Above: the orange form of buff footman, superficially similar to orange footman but with a different, straighter wing shape. I`ve had orange footman in my home trap in the past, but not for some years now. 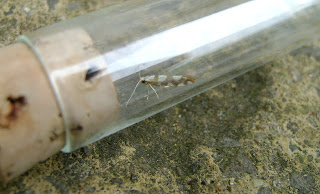 As Sam noted below, it is worth considering trapping tonight and subsequent nights if conditions are suitable.
Posted by Ian Morgan