On Sunday evening (preceding the home trapping session mentioned in the previous blog, 5/6), I visited a brownfield site on the coast at Machynys, Llanelli. A rich haul of micros was obtained but these are still being looked at and some will be in storage for some time. Diamond-back moths were abundant.
Yesterday afternoon, I visited two sites on the flanks of Mynydd Sylen (N of Llanelli). The first locality, on the northern slopes was not particularly successful, as a bull Welsh Black, his extensive harem and plenty of offspring did n`t like the look of me and I had to retreat - I`ll try again!
En route, and before the Big Black Bull gave me `dirty looks`, I did flush and catch a little Elachista from a wet, peaty pasture which I think may be E. subalbidella (click on pic to enlarge): 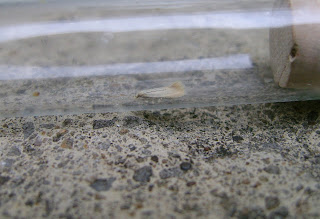 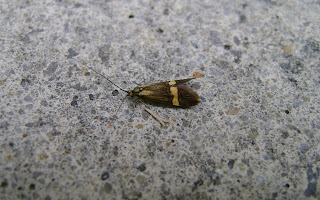 Next, I re-visited an area of neutral unimproved grassland on the NW side of Mynydd Sylen. The abundance of yellow rattle made me suspect that grass rivulets may be present and indeed they were, with three being seen: 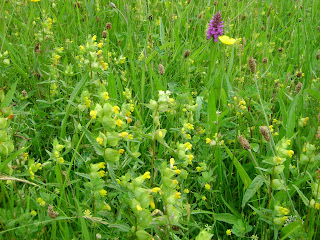 Above: showing the density of yellow rattle - there are four adjoining enclosures that are full of it! 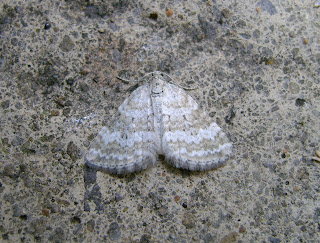 Above: a grass rivulet.
Other records were made at both sites and a third site (part of the former Cynheidre Colliery) was also visited. I also had another grass rivulet in my home Pwll trap last night* - doubtless from the nearby Millennium Coastal Park grasslands.
* a fairly decent catch, but the torrential rain deterred me from setting out my mobile actinics. The home trap was placed out after the rain had stopped.
Posted by Ian Morgan