Too windy for my liking, but good for sharks...

Yesterday evening (17/6) I spent half-an-hour`s `dusking`(pre-dusk, really) at the North Dock dunes LNR (Llanelli) but it was far too breezy and, apart from scores of diamond-back moths flushed from the crucifer-rich, disturbed dune grassland, only one latticed heath was seen.
Moving on to nearby Machynys for a `quick look around`, I was pleased to find a chamomile shark caterpillar on the very first clump of sea mayweed Tripleurospermum maritimum that I examined. A subsequent search of adjacent plants revealed no others and I set off home.
This afternoon, my intention was to have a good look at Ffrwd Fen NR, near Pembrey but, again, it was far too windy and, apart from the Glyphipterix thrasonella that were ubiquitous in the fen pastures, only a couple of common moths (eg the season`s first five-spot burnets) were seen, with the strong gusts of wind presumably keeping other moths hidden in the dense vegetation. The same strong wind rendered `sweeping` mostly impractical, though I did sweep a Depressaria larva from hemlock water-dropwort (see photo below):

Above: Depressaria sp. (daucella?- to be further checked).

I then moved on to Pembrey (Old) Harbour, thinking that I could at least search for moths in sheltered parts of the dunes or rummage about the upper saltmarsh vegetation. Here - perhaps predictably as I was right on the coast - the wind was even stronger and, apart for several butterfly species seen, little was noted. However, I did have more luck in finding chamomile shark caterpillars, finding three in all, with a very approximate success rate of one caterpillar per 25 plants examined in a rather cursory fashion. They are well-camouflaged and the foliage moving in the wind did n`t help in locating them. One was found on a plant growing on the inner slope of the clogged-up harbour basin, the second was in the splash zone on the western side of the old harbour breakwater wall (see site photo below) and the third was found on its host plant at the base of dunes to the immediate west of the breakwater. It may be worth checking other coastal areas if anyone gets a chance - Llansteffan upper foreshore comes to mind - look for the plant, then search for the caterpillar. The host plants in our area - sea mayweed (which tends to grow on the uppermost strandline or landwards nearby) and scentless mayweed (very closely related - they used to be sub-species - and extremely similar), which is often found on brownfield sites especially (in Carmarthenshire) near the coast. 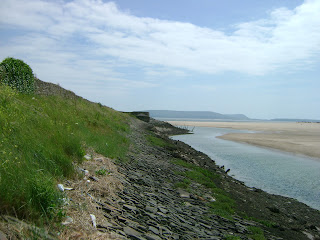 Above: the old Pembrey Harbour breakwater, looking south to Gower. 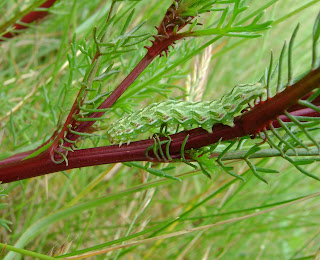 Above: a `chamo in its camo`, on sea mayweed.

I also found what were I believe are larval cases of Psyche casta on very large rocks of Carboniferous limestone, positioned alongside the edge of the coastal path west of the breakwater and overlooking Pembrey Saltings (see below). 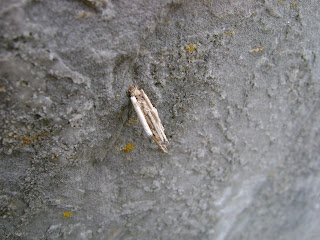