The imperfect night-time weather (northerly winds, rather `fresh` and clear skies at times) put me off taking my traps out somewhere last night. A compromise solution was to put out two traps in the garden - MV on the flat-roof and a mains actinic in the garden itself.
The numbers and diversity were not impressive - c 35 spp., and in small numbers and with very few micros. Once more, I suspect that the breeze and temperature `put off` most of the micros. After a few years, garden trapping can become rather tedious - unless migration is afoot - hence the fun of taking the traps to new places and habitats.
Last night, four species of hawk-moth were in the traps, including three privet hawk-moths and a single eyed hawk-moth (both regulars), a shoulder-striped wainscot and a common emerald (the latter not common in my garden). 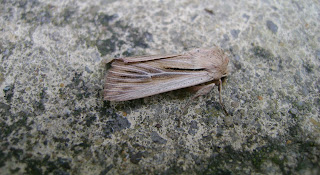