Two trapping sessions in the past week have given modest returns but were not without their moments of interest.  A rather drab, brown noctuid in Saturday night's trap puzzled me for some time, until it woke up and revealed feathered antennae.  Brown Rustic, I think, even though there were no obvious white marks along the leading edge of the wing. 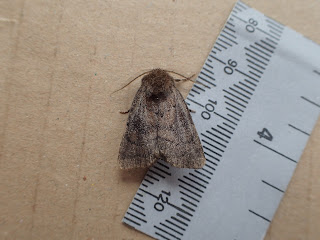 The best moment occurred this morning, though; I thought that I'd caught the first Poplar Hawk of the year and had actually marked it down as such on my note-pad.  However, something about the appearance seemed to be at odds with the many Poplar Hawks that I've caught here in previous years, notably the pink colouration and the black on the thorax: 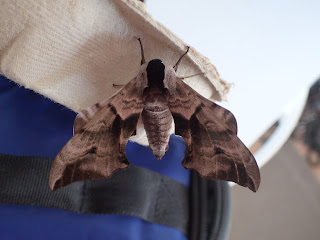 No eyes have been revealed yet but I'm sure that they're there.  Not only is this a first for me here, but I haven't seen an Eyed Hawk since my schooldays in the 1950s, when one hatched from a pupa that the Biology Master found in his garden.  The 60 year wait has been worthwhile!
Posted by Chris Handoll