Confused or just a Brocade?

I am a moth-er from Pembs. Last week we spent a few days at the caravan site at Rhandirmwyn. I did some moth trapping while I was there and was very pleased to trap a Scalloped Hook-tip which was a new moth for me (and as far as I can tell, not even recorded in Pembs). Whilst walking at Dinas we disturbed a moth from the bilberry by the path - we frantically followed it as it fluttered up the path and eventually it landed on a tree trunk - it was a Beautiful Snout - another new moth! The subject of this post is a different moth however. It was in the trap on Saturday night. At first I thought it was a Confused as it looks pretty much like the picture in Waring and Townsend and the side view seems to show what might be scale tufts at the base of the wing. However, the more I read the more Confused I get - they are supposed to be very like Dusky Brocade which is common and the habitat seemed not quite right and recently I have seen some 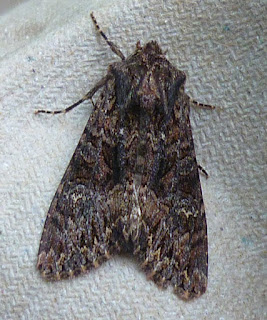 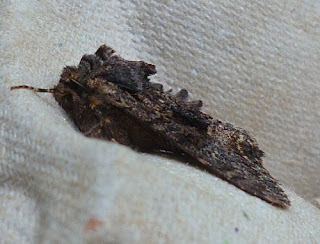 pictures of Dark Brocade which also look pretty similar! So given the location and the pictures above I would be interested in your thoughts.
Posted by Rosemary Royle