Check your mulleins - for mulleins! Yesterday afternoon (21/6), I paid a short visit to the saltmarsh area at Llangennech, hoping to re-find chamomile shark caterpillars where I`d found them back in c.2009. Then, I had chanced upon them on sea/scentless mayweed growing alongside the track which skirts the sewage works, itself located on an island that is cut off at high tides. On my latest visit, I failed to find any of the larval food-plant let alone any caterpillars, so I went to a close-by small area of higher ground (ie not flooded by tides) adjacent to the Mid-Wales railway, which passes Llangennech.
There, I found ample amounts of mayweed though no caterpillars, but on plants of great mullein Verbascum thapsus, there were about ten or so caterpillars of the mullein moth. Check your local plants and if you see any damage, look for the colourful caterpillars, which may occur as only one or two individuals per plant. Great mullein is by far the most frequent mullein which grows in Carmarthenshire (the rest are scarce or rare) and it can occur anywhere in the county - inland as well as on the coast. I`ve also found mullein caterpillars feeding on Buddleia leaves. 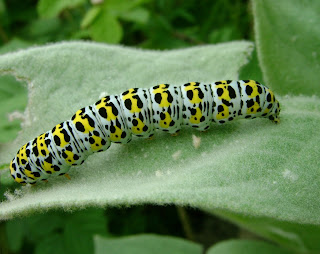 Above: the distinctive caterpillar of the mullein.
Posted by Ian Morgan