After two `heavy` nights trapping - Weds and Thursday - and with  particularly bumper catches on Thursday (and all the subsequent i/d and noting down), I did not trap on Friday night. The decision was helped by the heavy rain at the time when I would normally put out the traps - it does n`t bother me if it`s raining when the traps (MV and actinic) are out, but I find it a nuisance when putting out and collecting in.
Feeling relatively rested on Saturday, I would have liked to put out at least some traps on that night, but heavy rain was forecast for sometime after midnight and, crucially for me, at the time when I would have inspected the traps on the following morning. So, I decided instead on an hour`s dusking and a brief trapping episode (I had planned to midnight) on the coast east of Burry Port - just the one actinic and with me watching over it.
The dusking started off well, with a few species swept, including the chamomile shark caterpillar shown below, all from an area of dry but flower-rich grassland. However, it was noticeably cooler than previous nights with certainly a change in the weather and I was glad that I`d brought a jacket to keep warm.
The sweeping was n`t producing the numbers I had expected, with just a few common species caught and no moths were seen flitting about, except for diamond-back moths disturbed by my progress through rank vegetation.
The actinic was set up in a slightly sheltered position (there was a markedly cool breeze) almost on the seaward edge of some low dune grassland - but no moths arrived, so at 11.20pm, I packed up and went home. On previous experience, some moths ought to have arrived by then. The MV, which I had set up at home also had very little in it - just a few micros, including Caloptilia stigmatella - so it too was dismantled and stored away. 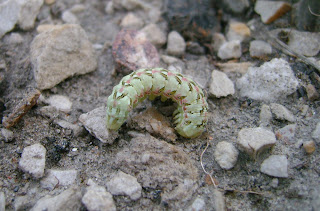 Above: chamomile shark caterpillar, found on floriferous rough grassland adjacent to the football pitch, Burry Port. There are only about ten or so records for this species in Carmarthenshire.
Posted by Ian Morgan