It seems that, yesterday (2nd June), both George Tordoff and I were on Mynydd Llangyndeyrn without being aware of the presence of each other. Indeed, I suspect that the car next to which I had parked, was George`s! Furthermore, I was actually on the way to the Tir Eithin holding on Mynydd Llangyndeyrn (where George saw the marsh frits) when I changed my mind and turned back, as it was quite hot and I was tired. Yesterday afternoon, I had been on a rather rushed, whistle-stop tour of a few sites in SN41, trying to increase the number of diurnal moth records from this under-recorded 10km square.
Anyway, some records of quite common micros were made at the site with the best being Cauchus fibulella, the smallest British `longhorn` moth. I had gone to the northern salient of the common, just west of Clos-yr-ynn (the `enclosure of the ash trees) where the underlying rock is Carboniferous Limestone and where I had recorded forester moths in previous years - I had wanted to see if the latter were out yet, but they were n`t.
Noting the abundance of germander speedwell (particularly on the `tumps` formed by Lasius flavus nests) I checked the flowers for Cauchus fibulella and indeed found one. I have previously had this species at the site. Several mother shipton moths were also seen. 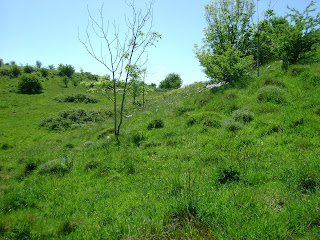 Above: view of part of the northern limestone section of the common - the rest of the common comprises contrasting acidic upstanding ridges of Millstone Grit/quartzite or linear topographical hollows on weaker shales. 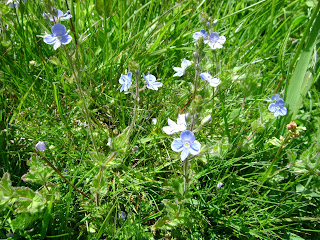 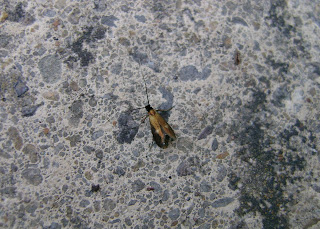