Sweeping and beating in SN41 and SN40

As I`ve been very busy with various tasks recently, I`ve motivated myself to complete those tiresome `work units` by rewarding myself with some late afternoon micro-moth hunts. On Monday (23/5), I went to the poorly recorded SN41, visiting the Pont Ceidrych area SW of Porthyrhyd.  I had intended to visit an area of riparian fen - Ynys Uchaf -  but I`d forgotten my wellington boots; incidentally the place-name`ynys` is often used in the context of `river flood-meadow` as well as the more commonplace `island`. So my mothing antics were confined to roadside sweeping, with six species recorded, all except one being micro-moths. I was, however, surprised to sweep the distinctive red-and-black froghopper Cercopis vulnerata, the furthest south that I`ve had this species (most records are NE & mid Carms).
My next stop, Mynydd Llangyndeyrn, only yielded three moth species, with Cydia ulicetana abundant on the western gorse that grows on the acidic rock outcrops.
Capel Dyddgen woodland on the Carboniferous Limestone was better and it produced 8+ moth species (I`ve still got a few to look at) including a little emerald, a moth that I rarely see. 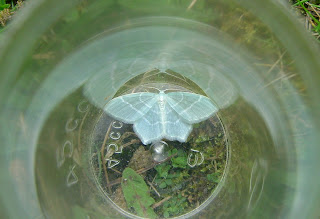 Above: little emerald at Capel Dyddgen. 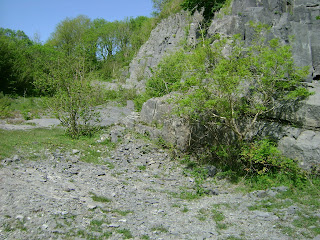 Above:`Habitat shot`-  the `upper quarry` only accessed by climbing a cliff or via dense woodland. Here I saw another rather local Carmarthenshire moth, a speckled yellow.

Yesterday, Tuesday (24/5) I went to some sites that were closer to home, all in SN40. The first location visited was Ffrwd Fen near Pembrey, a joint Llanelli Naturalists/Wildlife Trust nature reserve. Here only a disappointing three moth species were noted (Bactra lancealana, Mompha locuptella and hundreds of Glyphipterix thrasonella). I offer only another `habitat shot` of the fen pastures at Ffrwd below: 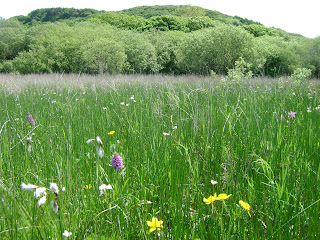 Above: part of Ffrwd Fen with marsh marigold, cotton-grass and marsh orchids.

Afterwards, the fen-carr wooded strip alongside the old canal/railway at Pontnewydd was the venue but I chanced upon an old friend and spent the time gossiping (and only a few moth species were therefore recorded). Finally, I visited a small quarry area on nearby Mynydd y Garreg where the only mention-worthy moth was a possible Agonopterix nervosa in the form of caterpillars on broom. However, there are other Agonopterix that feed on broom - assimilella and scopariella...the former could be a possibility, but the latter doesn`t seem to occur our part of Wales, so the `jury is still out` - and I`ve now released the caterpillar.
Postscript: I`ve now checked the larval plates in `UK Moths` and it looks like that the caterpillar is indeed nervosa, with the pale subspiracular flanks etc.