I made my second butterfly monitoring visit to NRW's Pembrey Forest yesterday and was lucky to encounter almost unbroken sunshine on Costa del Carmarthenshire. Butterfly Conservation usually make three visits between mid May and early June to monitor the important populations of Small Blue and Grizzled and Dingy Skipper in the forest. Other species are of course noted.

A single Green Hairstreak was seen though there were no Marsh or Small Pearl-bordered Fritillaries in evidence. The highlight, though, was a single Anania funebris close to the butterfly ride at SN392020. I saw one here in 2012, and one nearby in 2014...there's a pattern developing. The nice thing this time was that rather than dashing off before I could get the camera out, this one showed no intention of leaving the little patch of Bird's-foot Trefoil where it was nectaring and even posed briefly for a photo (they usually rest upside down under leaves). In fact when I walked past the same spot an hour later it was still there. 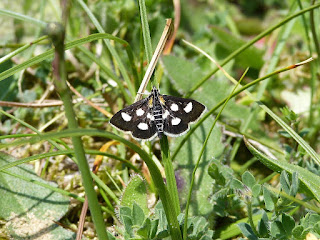 Small Blue numbers were very good yesterday - a count of 39 was the best since 2009, and numbers may be yet to peak. Kidney Vetch has increased in the last couple of years after a period of scarcity - the populations of this butterfly always seem to mirror the fortunes of its foodplant. Grizzled and Dingy Skipper numbers have been a bit poor this year though.

I'll make a final visit in around a week's time....