Only now am I going though the micro-moths caught over the weekend - have been just too busy.
One of them looked like the `spruce seed moth` Cydia strobilella and George Tordoff kindly confirmed the i/d for me. According to George (and also `Atropos Flight Arrivals`) it`s been turning up elsewhere as a presumed migrant. There`s a semi-mature Norway spruce in next door`s garden but it`s quite possible that mine too was migratory. It`ll be new to Carmarthenshire and one old record (1930s) is given for Glamorgan. 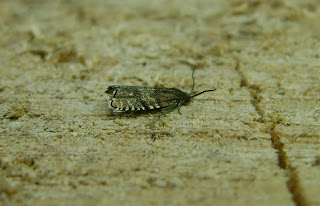