More Grey Micros, and others

On Wednesday night my MV trap (in the greenhouse, sheltered from the rain) attracted several very small grey moths which appear to be the same as the one I reported last weekend, which was tentatively identified as an Elachista sp, probably E.canapennella (thank you George and Sam).  My attempts to photograph these tiny moths, FW 4-5mm, continue to be only partially successful: 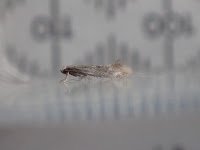 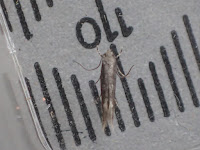 Incidentally, I have only found these moths in the MV trap, they don't seem to be attracted to the actinic lamps, unlike another micro trapped on Wednesday night, Dyseriocrania subpurpurella, which also turned up in a small actinic trap used on Thursday night: 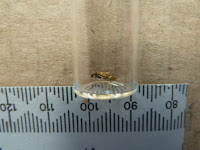 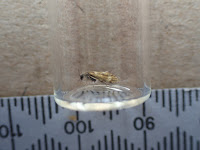 This is also true of Semioscopis steinkellneriana, which visits traps of both kinds, but doesn't venture inside them.  This species seems to be having a bumper year around here, I have recorded one or two on each occasion I have trapped during the last couple of weeks: 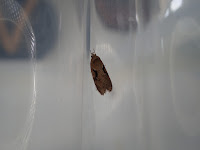 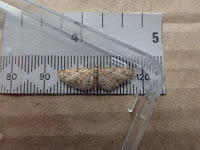 Pugs have started to arrive in numbers and continue to consume hours of deliberation.  Most of them have been light brown jobs, fairly lightly marked, of which the above is a fairly typical example.  The size, shape and marking of these suggest to me that they are Brindled Pugs.  Another from Wednesday night is clearly different, smaller and more strongly marked, possibly an Oak-tree Pug? 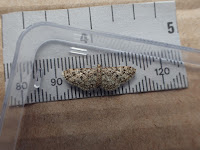 Finally, two which are different again and seem likely to be Common Pugs.  However, I have noted that the forewings are of different shapes - the first is more rounded - so I may have to think again; perhaps someone would kindly advise. 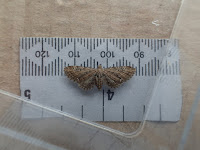 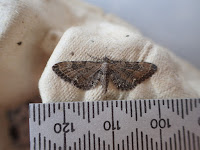