Compared with my home square (SN40 `W of Llanelli`), the close-by and adjacent SN50 (`Llanelli east and N of Llanelli`) is relatively under-recorded. One of my aims this year is to try to increase the numbers of records in SN50 and in another adjacent 10km square, SN41.
Yesterday afternoon (28/5), I went for a `sweep and beat session` at some SN50 sites, starting off with the northern part of Troserch Woods, Llangennech (SN546043). It was rather disappointing (though much good habitat is present and the site certainly has great `moth potential`), but I did sweep lots of Glyphipterix aureatella from bilberry. 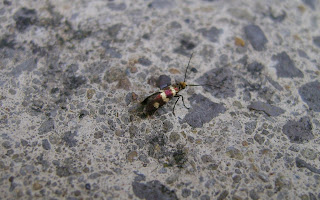 My next stop was on the eastern flank of Mynydd Sylen, where I took a sunken lane (SN518077) that descends eastwards, before rising again to a remote, ruin farmstead to the S of Ty`r Mynydd. It`s a pleasing walk, with plenty of interest: singing cuckoo, meadow pipits, linnets, garden warblers - all birds of the Coalfield of my youth that are now lost from many areas. A wet pasture to the south of Ty`r Mynydd once had marsh frits but attempts at agricultural improvement messed it up, though it has since reverted to rush pasture and, at its pathside edge, cuckoo flowers had Cauchus rufimitrella. 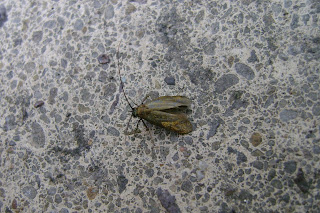 Above: Cauchus rufimitrella, which can presently be found on cuckoo flowers (also seen at Cencoed-uchaf later in the afternoon).

My next halt was to follow a track into some conifer plantings E of Glyn Sylen (SN507072) and this site was a bit of a revelation in that I was pleasantly surprised by the survival of quite an extensive area of unimproved neutral grassland, with hay meadows full of yellow rattle and other plants. 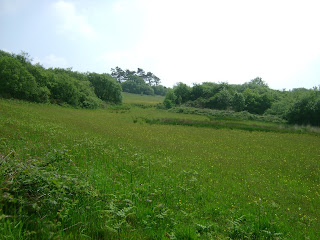 Unimproved hay meadows near Glyn Sylen (including those in the distance and others out of the photo).

This site had plenty of moths, including burnet companions and a solitary small yellow underwing (photo below). Its caterpillars feed on mouse-ears (Cerastium sp.) which are frequent in these pastures and it is a moth that has much declined. 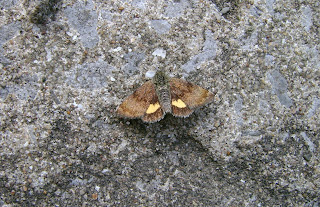 Also seen was this tortricid shown below: 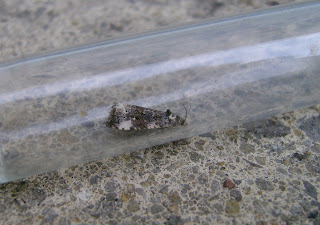 I also did a lot of away-from-home trapping last night (conditions were good) and there were ample numbers of moths in my traps. I`ll report back when I get a chance (after checking some specimens and doing a back-log of chores!).
Posted by Ian Morgan