Peter Sturgess has been in touch, reporting the capture of  a second Cydia strobilella in the county, this time at Graig Farm in NE Carmarthenshire. This second county record of what may be a migrant individual was caught on 12th May, and follows on the preceding Pwll record and others in southern England. Possibly it may establish itself in our spruce plantations (if it is not already breeding in them)? 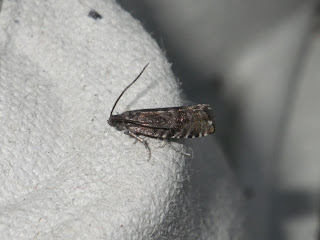 Postscript: George Tordoff caught this species at Hensol in Glamorgan, also on 12th May.
Posted by Ian Morgan