I tried my new sweeping net for the first time in the garden yesterday afternoon and caught three moths, Micropterix aruncella, M.calthella and Glyphipterix simpliciella.  It has given me encouragement to use the net more often, particularly on the verges where Greater Stitchwort abounds, and around the pond where I have often caught glimpses of small fluttering insects but haven't had the means of apprehending them.

It also prompted me to put an actinic trap out last night. The catch was modest but included 4 FFYs: Broken-barred Carpet, Clouded Silver, Lychnis and an Acleris sp., but I'm not sure which one. 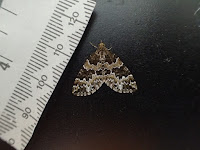 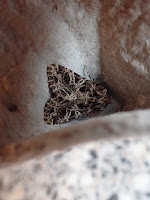 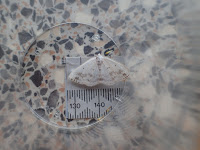 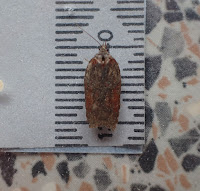 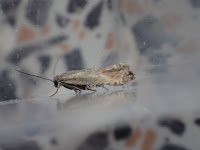 My initial thought was that the Acleris was most likely to be A.laterana, but the reddish 'costal blotch' is ill-defined and, according to The Book, it's a bit early for the species.  A.schalleriana might be a possibility.  The other micro photo is one I caught in the garden last week but failed to get a decent image of it (got fed up with trying and let it go!)  It was quite small, fl 7-8mm.  Any suggestions would be very welcome.
Posted by Chris Handoll