As with Chris and Steve, I`ve been busy trapping since the onset of good mothing conditions last Thursday night, trapping on three consecutive nights with the inevitable early starts that prevail in this late spring to late summer period. I echo Steve`s comment of `getting too old for this lark`, especially with busy intervening days with various hassles! But moth trapping is great fun and quite addictive at times.
Anyway, over to business... I had six trap sites (a couple with two nearby trap results amalgamated) at my garden (twice); another Llanelli suburban garden (x1); a conifer woodland site (x1 - plenty of moths but no conifer specialists); and two different rank `rhos`/birch woodland sites.
I have n`t yet counted up the total number of species recorded but no less than 29 species were FFYs (too many to list!) - the warm nights certainly enticed the moths out. It seems that the sudden onset of warm weather, after a markedly cold April, has compressed emergence with lots of fresh-looking new moth species sharing the trap with `lingering` individuals of more typically early species such as clouded drabs and various quakers. It`s been a good year, in my local patch at least, for frosted greens and brindled beauty numbers have also been high too. Probably the couple of waved umbers at one site and the same with grey birch at two sites were the highlights of  my weekend trapping. Unfortunately, it`s getting cold next Friday, with northerly winds, so next weekend`s conditions won`t be ideal. 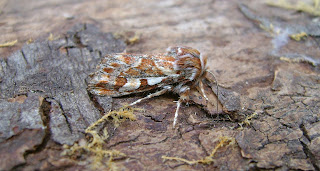 Above: always a nice moth to see - pine beauty, recorded at two sites. 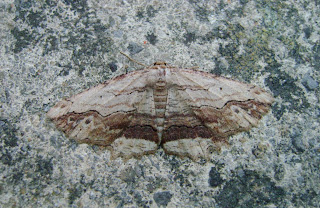 Above: waved umber (bit of a blurry shot). A local moth associated with gardens at times, as the food plants include privet and lilac. 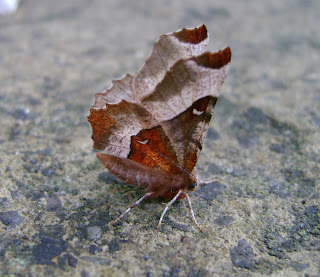 Above: purple thorn, just one of the many FFYs.
Posted by Ian Morgan