The area known as Pwll Fishing Lakes comprises a rather ill-advised venture by Carmarthenshire County Council back in c 1998 to establish a coarse fishing lake at a (saline!) site within the Millennium Coastal Park on the western outskirts of Llanelli. The project failed, but at least it created a visually attractive lake and wetland area that has since attracted wildlife, so good came out of it after all.
Anyway, on a quick walk this morning, I had a look to see what was around in lepidopteran terms.
Remembering an article in a quite old Glamorgan Moth Group newsletter where Barry Stewart suggested checking teasel seed heads for larvae of the tort Endothenia gentianaeana, I had a look and quickly found some larvae.
George Tordoff very helpfully made a suggestion in the `Comments` section for this post, where he recommended checking `UK Moths` to see whether the larvae were E. gentianaeana or E. marginana, another species that also uses teasel heads. To be honest, I did n`t realise that the latter species did so, and I took up George`s advice. Upon checking, it was actually E. marginana that I had found, as the head was jet black, the thoracic legs were translucent greyish black and it had an `anal comb`. E. gentianaeana has the head a `dark pitchy brown`, thoracic legs a yellowish brown and no anal comb (all i/d info from the text on UK Moths). Thanks again George for your advice.

Below: E. marginana , photos of an in situ larva and two extracted larvae and a pupa from three separate teasel heads. 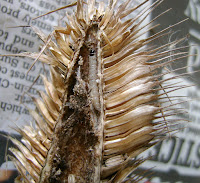 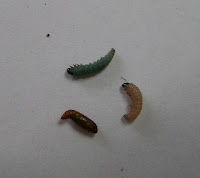 I also checked the fruiting heads of bulrushes Typha latifolia for Limnacea phragmitella, as about fifteen years ago, I found some larvae of this micro-moth at Machynys (south of Llanelli), which were kindly determined by Sam. I found some more today after a little more searching than was needed for the previous species. I unfortunately left the seed heads on the ground but, if I get a chance, I will return to get one to photograph.