On Monday night I put the MV trap in the greenhouse because the weather was uncertain and a few moths arrived.  Like Mel's, most of them settled outside rather than inside the trap.  Final tally: 6 March Moths, 3 Early Greys, 2 Clouded Drabs and 1 each of Hebrew Character, Common Quaker and Small Quaker.  More interesting, though, was the woodshed window, which without the help of any lighting yielded 2 Mompha divisella individuals, one on Monday and another yesterday. 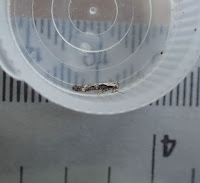 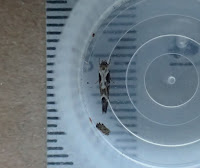 It's nice when moth 'events' repeat themselves from one year to the next.  It suggests that we have a reasonably stable environment, at least in respect of this species which turned up in the woodshed at much the same time last year - April 14th.  I was tempted to save one of the moths for dissection, but decided not to in view of the fact that the identity of last year's moths was accepted.  It will be some time before I become sufficiently adept at the dissection procedures learned at last weekend's course to apply them to such a small moth!
Posted by Chris Handoll