The domination of various quaker species and nothing particularly unusual in the two garden traps last night (2/4) meant a lack of colour and variety. Eleven species of macros and two of micros was the final score (unless I`ve forgotten something). As noted, quaker numbers were quite high with 26 common quakers and 8 twin-spotted quakers. The only `new` FFY macro was a brindled beauty which accompanied the sole splash of colour in the trap, in the form of an oak beauty. The weather had changed from that which was forecast a couple of days earlier, with lesser temperatures and cooler SE winds.
A Caloptilia betulicola was caught in one trap, perhaps not surprising given the dominance of birch in wet scrub seawards of the garden and on the nearby hillside. Looking back at an earlier blog post (25/1), I suspect that an unidentified Caloptilia that was pictured then was also this species, but the colour of the hind legs was n`t checked, so that January capture remains unidentified. 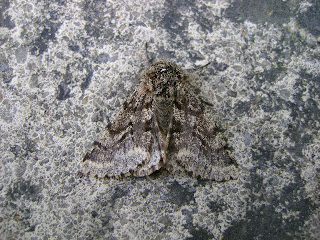 Above: underside of Agonopterix heraclina caught last night. If you look carefully - I suggest that you `click` on the photo to enlarge it - you will see a single darker line near the hind wing fringe. This solitary line distinguishes A. heraclina from the similar (from above) A. ciliella, which has five darker lines.
Posted by Ian Morgan