After a long day spent painting emulsion on walls I felt like some mothing. I was in a rush, and rather tired, so (atypically) I did n`t check the forecast for the forthcoming night - but a still, rather pleasant evening prompted me to set out a garden trap and three `mobiles`, one on a rank, wet `rhos` site and two in nearby conifer woodland, mainly to target conifer micros.
Later in the evening, when dark, I noticed that the skies had cleared and it was rather cool - I should have checked the forecast.
This morning it was the usual seasonal `quakery` dominance in my home trap but there was some interest in my `away from home` actinics. The one left in more open conditions on a rhos site at Cencoed-uchaf was hopeless with just three moths (singles of three common species). Perhaps this was not surprising as there was ice (not frost) on the trap, which gave me cold hands taking it back to the car.
The two separate conifer woodland traps had more variety, but no micros - it was probably too cold. There were lots of early tooth-stripeds, some late dotted borders, FFY shoulder stripes, a pale brindled beauty and several engraileds. The spring moth season is rather slow this year. 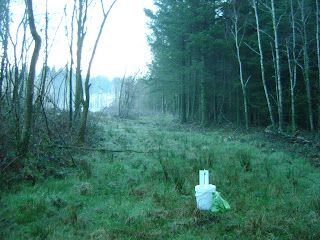 Above: a shaky shot of one of the trap sites, adjacent to spruce and pine woodland. Crossbills were `chupping` overhead. 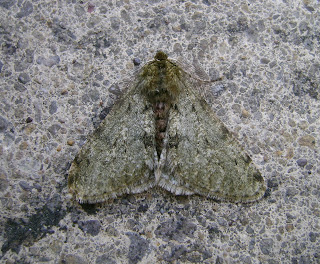