Butterflies at Ffos Las and Penclacwydd

The warmer weather in recent days have encouraged the butterflies to start to make an appearance on Ffos Las at last, just in time for the temperatures to plummet again if the forecast is to be believed. I saw my first 2 peacocks on 12th April, a small tortoiseshell on the 13th a speckled wood on the 16th and a male brimstone on the 19th.  These were my first sighting of each of these species on Ffos Las for the year.

Wednesday 20th April was beautiful and having spent several hours over the previous few days digging the garden, I treated myself to a trip to Penclacwydd where there were several orange tips, male and female, fluttering over the cuckoo flowers. 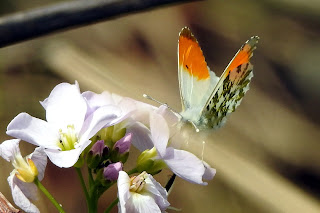 There were also several brimstones and peacocks on the wing at Penclacwydd.
Yesterday, 24th April, was another beautiful afternoon for a walk so it was back round the Ffos Las circuit where I saw my first 2 dingy skippers of the year. 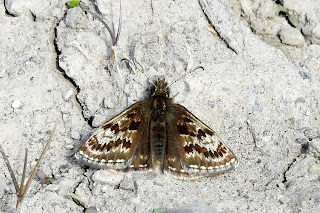 This individual was on the path below a sparsely vegetated bank where I have often seen them in the past. Much of that bank and the hedge line along the top has been lost over the last year because of the new houses being built, but thankfully the only section to survive unscathed has left this short section much favoured by the dingy skippers and common blues. Also seen on Sunday were 1 female and 3 male orange tip, 7 peacock and a small tortoiseshell. 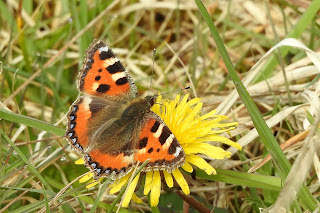