Last night (21/3) and almost on a whim, I put out two actinics at a rank `rhos-pasture/birch scrub site E of Myrtle Hill on the southern flanks of Mynydd Sylen near Llanelli. My third actinic did n`t work (problem since solved).
It was reasonably warm - or so it felt - and cloudy when I set out the traps but I was a bit disappointed this morning with the numbers of individuals caught, though there was an aggregated tally of ten species in the two traps. The best moth was another yellow horned.

Below are two Caloptilia spp., caught on the same night, that I`ve just got around to photographing: 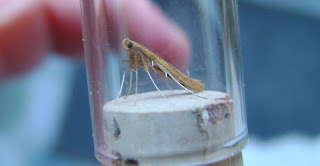 Above: I think that the above (two photos) is Caloptilia betulicola, a birch-feeding species. The hind leg looks whitish to me suggesting betulicola? 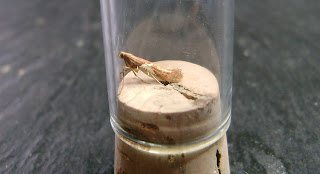 Above: believed to be C. stigmatella, which feeds on willows, aspen and poplar (the trap was actually close to an aspen).
Please correct me if my assumptions are wrong - thanks.
Posted by Ian Morgan