Orange underwings not out yet....

It might be thought that a negative record may be pointless but it`s worth pointing out that searching for orange underwings can often be `hit-or-miss`. I`d gone to a site near Llanelli where I have regularly recorded this species over recent years but, in spite of a patient spell of birch tree-top watching for 20 minutes, and in warm midday sunshine, failed to see any. I suspect that they`re simply not out yet.
The best strategy is to search more or less immediately when someone else has already recorded this moth in the county - and then search likely sites with birch thickets, as emergence can be synchronised. A few years back, I deliberately targeted appropriate sites after recording the species, and a two day `blitz` in good sunny weather, yielded quite a few records.
As I failed in my mission, I went to `recce` some suitable conifer sites for moth trapping later in the season (having decided that I`ve been neglecting the potential of moths associated with conifers). I found two good trapping sites but, at the second site, it seems that I`ll have to pick my exact site carefully so as not to disturb a pair of goshawks. I`d heard the female goshawk calling noisily and repeatedly from this site last spring and promised myself to check it out - but time flies and moths intervened, so I did n`t.
Anyway, I heard the female `barking` rather angrily as I entered this particular wood this afternoon and I quickly found the nest, high in a Norway spruce. It`s a big structure that has obviously been used in previous years and it has been freshly decorated with fresh conifer foliage, suggesting occupancy. 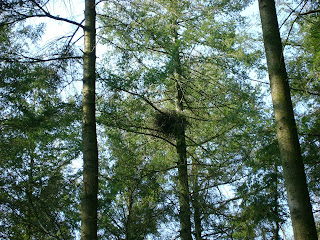 Above: no moths, I`m afraid, but a goshawk nest as compensation.

A peacock butterfly was in the garden this afternoon, but the forecast for tonight is too cold and clear for worthwhile moth trapping; Friday night currently looks reasonable.
Posted by Ian Morgan