I put out my Pwll garden MV on both Saturday and Sunday nights, hoping to catch something brought in on the warm (for January) southerly winds. Saturday night was rather windy and wet whereas last night (Sunday 24/1) was more benign - little or no rain and with a gentle southerly. There were no moths at all in Saturday`s trap, but with last night`s efforts there were six moths of six species - but no migrants.
The moths were: dotted border, chestnut, Epiphyas postvittana, Caloptilia stigmatella, Caloptilia elongella (? - see photo) and Ypsolopha ustella. Click on the photos to enlarge. 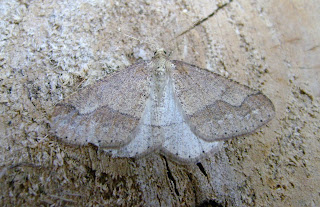 Above: I believe that this is one of the various colour forms of Ypsolopha ustella. 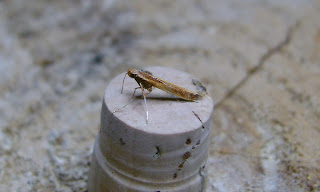 Above: is this Caloptilia elongella, an alder-feeding species? - I`m not sure. I would have also liked to have included a photo of a well-marked C. stigmatella that I additionally caught, but it flew off somewhere in my kitchen. Hopefully, the spiders` webs won`t have had it, and one of the kitchen light will re-attract it tonight, so that I can include a photo tomorrow.
....and here, below, it is - I obviously re-caught the moth! 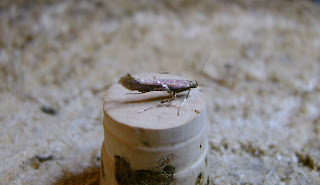 Confirmations or corrections of the micros are welcome! Thanks.

February will be the peak month to record small brindled beauty, a species that has already been recorded (in January this year) by Stephen Ruttle on his farm south of Llandovery. It was also recorded there in 2015, on several `early year` occasions - the first time since a rather old Rothamsted record from Rhandirmwyn. It is a species of old oakwoods and really worth looking out for, if you can trap in such habitat during this late winter period. A photo of one of these NE Carmarthenshire moths is shown below. 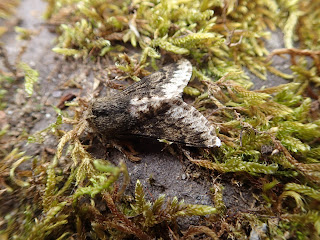