.....for me this year, probably. The first calm and dry night for what seems like several weeks prompted me to crank up the MV in the Dutch barn at Cwmllwyd last night (Thursday 19th November) to try to fill in the gaps in late season captures. The first moth appeared on the outside of the trap at 18:35 - the second sighting this year of Rusty Dot Pearl. This was followed by another in the trap sometime during the night. Second arrival, at 19:45 was this December Moth (FFY): 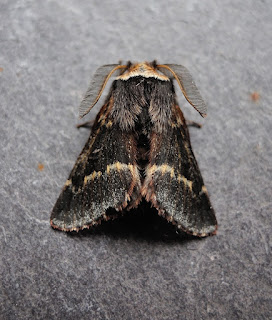 A Winter Moth was only the second for this year as one was found here on 5 January. Singles of Feathered Thorn and Yellow-line Quaker completed the catch. So only 6 moths of 5 species, with just one added to the year's total which now stands at 269 species - a record for Cwmllwyd.


Looking forward to the next season: Merry Christmas everyone!
Posted by Steve Clarke