A warm overcast night at Cnwc produced a bumper haul of moths - well over 100 individuals of 24 species.  40+ Spruce Carpet topped the bill, although the clear-felling of the Spruce plantation behind Cnwc this summer may mean this is their final big autumn.  Epirrita sp (highly varied but I didn't have the heart to dissect any) and Yellow-lined Quaker were next most abundant, with 16 and 17 respectively.  New for the autumn were 2 Mottled Umber, 3 Merveille, 1 Satellite and 1 Red Swordgrass. 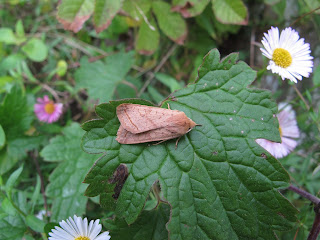