Five ecologists/hydrologists visited the northern part of Cors Goch Llanllwch SSSI yesterday afternoon to look at the likely causes of localised Molinia dominance on this important raised bog.  At one point I though I'd have a quick look for Coleophora cases on the abundant Calluna and Erica, and to my surprise found a very obvious black case on the first bush of Erica tetralix I examined.  This surprised me, because I thought the ericoid-feeding Coleophora was very subtle and hard to spot, but I had forgotten there are actually two species on British heathers and I had stumbled across the more distinctive one - C. pyrrhulipenella. 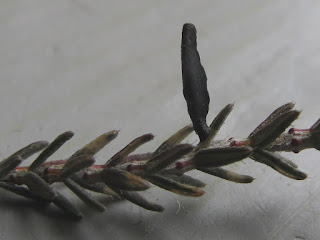 The other one - C. juncicolella - makes cases from several mined leaves and is apparently most easily found by sweeping and then waiting for some of the debris to move.  Neither species has been found in Carmarthenshire before, as far as I'm aware (I have a nagging feeling George had juncicolella earlier this year but can't find a blog or email to confirm that and may be muddling with VC35).

My C. pyrrhulipenella is surprisingly active.  When I first found it (left photo) it was mining inside a leaf just below the Erica flower cluster, whereas late this morning it had moved down the stem by three leaf whorls and was mining a new leaf (right photo).  As far as I'm aware, the larva of this species (like other Coleophora) makes a small round hole in the leaf epidermis, attaches the case around that hole, and then eats its way through the inner bits of the leaf leaving a hollow 'shell' of epidermis.  I wish I had been able to watch it moving! 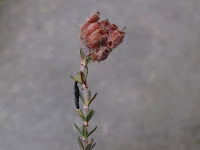 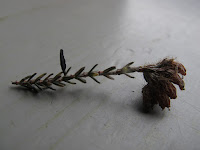