I had a quick wander in the adjacent Llanelli Millennium Coastal Park (which lies just seawards of my house) yesterday afternoon, and chanced upon a single buckthorn Rhamnus carthartica and three bushes of alder buckthorn Frangula alnus at the edge of a scrubby area/amenity planting. These are the food-plants of the brimstone butterfly as well as various moths such as the tissue moth. I have grown alder buckthorn (and once, many years ago, buckthorn) to plant out to encourage dependent lepidoptera, though the ones I stumbled upon yesterday were plantings not by me but local authority rangers, made soon after the park was landscaped.
Barry Stewart made the interesting observation when he worked (in the late 1980s/early 1990s) at the Wildfowl and Wetlands Trust Penclacwydd Centre at Llwynhendy, that the local brimstone butterflies at that site were only using alder buckthorn.
Alder buckthorn occurs sparingly in several known areas of the county, with recent records from a bog near Pont Abraham and at Llwyn-teg in SE Carmarthenshire and also near Rhandirmwyn, but is scarce  and sporadic. Buckthorn is even rarer and probably only occurs as a native on the limestone ridge, as at Carmel and near Drefach/Porthyrhyd above the Gwendraeth Fach. There have also been a very few plantings of the latter in landscaping schemes along the Llanelli coast.
There are a few rare micro-moths (including leaf-miners) that use both these species but they have not, to my knowledge, been recorded in our county. 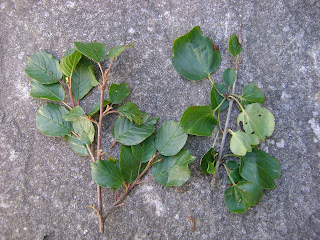 Once, you get a `feel` for these shrubs, you`ll spot them easily. Alder buckthorn has slightly glossy leaves and greyish-brown `speckled` stems. The often-larger buckthorn has distinctly grey stems and slightly serrated leaves and can be sparsely `thorned`. Both have berries with those of alder buckthorn red at first and then turning black when ripe, whereas buckthorn berries are greenish when unripe and also black when fully mature.
Posted by Ian Morgan