A Moth or Two in spite of Trap Failure

It was overcast here last night so I set my (fairly new) Skinner trap up, connected the battery, whereupon the actinic lamp flickered a few times but failed to ignite properly.  After fiddling with the connections for a while I gave up on it and substituted the small actinic trap, which has never let me down.  By that time the porch light had attracted a few moths including a Red Swordgrass, which I haven't seen since 2013.  It had landed on the front door, so photographing it in poor light was tricky - apologies for the poor image. 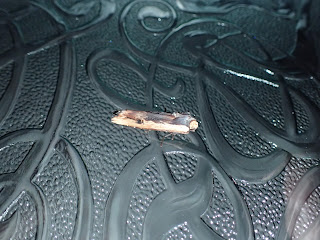 Overall the catch was modest, porch light and trap yielding only 6 species , the others being Common Marbled Carpet, Spruce Carpet (FFY), Epirrita sp., Setaceous hebrew Character and Green Brindled Crescent. Now to establish what's wrong with the Skinner trap, fortunately I have a spare lamp if that's the problem.  If it's working I will probably switch it on tonight.
Posted by Chris Handoll